Overview
Some call them 'card walls', some 'story walls', others just 'the wall'. There are many names given to the wall but its purpose is the same, to convey project information to the team and other interested parties / stakeholders. I work on a software development team but Kanban boards can be applied to any process, from manufacturing to household to-do lists. Honestly the uses are as wide ranging as your imagination. But this article concentrates on software development.

Some teams practice 'scrum' and put tasks on the wall, some XP and run on weekly/2 weekly/4 weekly iterations, but we are running in a kanban mode at the moment, applying Work In Progress (WIP) limits as best we can.

I've worked on many different teams, with many different types of wall/board, from scrum to xp, from big walls to tiny boards. I think the Kanban inspired wall we are currently running with is the best I've have the good fortune to use. So I thought I'd share - I'll try to run you through it as best as I can. 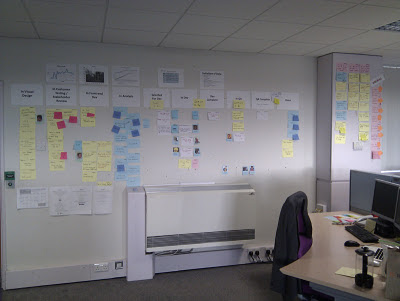 We are fortunate enough to have a very big space for our card wall (3-4 metres wide). I have been on teams that have had to manage with a small white board. Having said that, we have still filled every available space, and it would be nice if we had even more.

The size allows us to show lots of project relevant information and also include plenty of room for up stream activities like information architecture (IA), user experience (UX) and analysis. So we have lots of visibility as to the state of all aspects of the project.

The Columns
The columns are detailed below in their own sections, but to summarise they are:
The WIP Limits
Work In Progress limits help us to focus on the tasks currently in play. Too many tasks on the board at any one time can mean the team is spread too thinly. Traffic jams can occur and important bug fixes won't get through quickly.

Example without WIP limits:
Two big stories have just been finished and so QA now gets to work on them, whilst the developers start on new stories. At this point all four dev pairs are busy, as are the two QAs. A day later the testing is still not complete and another pair finishes their story, this story gets queued up in waiting for QA. If there were no WIP limits the pair would start a new story and get on with that work. But what happens if there is then a bug in one of the stories, a big bug? Who should pick it up? A dev pair need to stop what they are doing mid flow, shelve all their current checked out work, context switch to the bug, investigate and fix it. I guess you know where this is going, with effectively three stories in QA and four stories in dev everyone is going to be flip-flopping between stories and bug fixes. Context switching costs time and the whole process reduces our ability to respond to change. The main consequence being that throughput and velocity suffer, not to mention the headaches of leaving half finished code laying about whilst you fix something else.

By limiting the number of stories in each column this does not happen (well, much much less so). Developers are always available for fixes and everyone experiences less context switching and more uninterrupted flow. 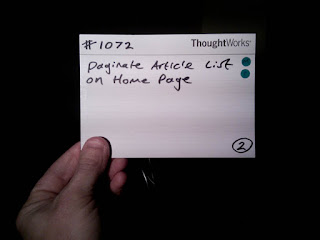 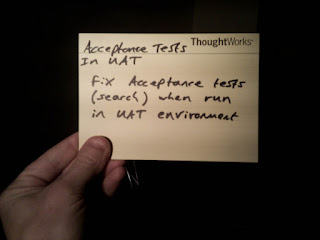 
Flow across the wall
Features start their life in the 'In analysis' column. All the features that are designated for release 1 are in this column in priority order. Whilst the BAs are working on splitting stories out, the UX and IA guys are also looking into how best to fulfil the users requirements from a design perspective, and they put their own cards up on the left of the board.
Once a story is ready to be developed, a white card is placed in the 'Selected for dev' column and waits here until a dev pair is ready to pick them up. At which point they are moved in to 'In dev' until the pair has showcased the story to the QA and BA's satisfaction at which point it moves into dev complete (awaiting QA).
The QAs pick up cards and work on them in the 'In QA' column. Cards NEVER move backwards, if there are bugs to fix a dev pair will move to fix it in the QA column, whatever they were doing will remain in the 'In dev' column. Once the QA is happy with the card it will move into 'QA complete' where the BAs now showcase the story to the product owner before moving it to 'Done'.

The Columns In Detail 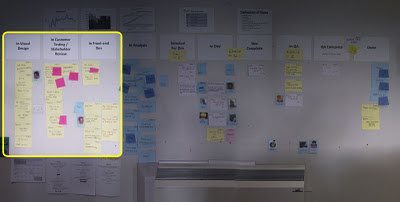 Walls I've often worked with in the past have not had a design area on them. This project has a heavy design and UX aspect and so it was important to have this area on the wall so we can all see what features are at which point in the process.
The columns we have here are: 'In visual design' for development of the wireframes and IA; 'In customer testing'; and 'In front end dev' for development of the UX including styling and image creating. 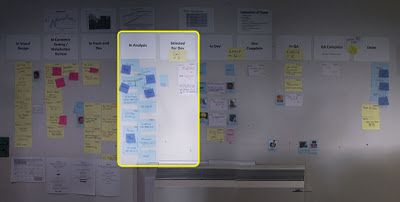 
The Analysis columns consist of 'In analysis' which list all the features of the current release (release one is about nine months) we keep stickies on the features (blue cards) to show how complete features are. The 'Selected for dev' column is used for the next stories to be picked up by the dev team (white cards), these stories should have been through the analysis process and be ready for devs to pick up, this column also serves as a heads up for the QAs so they can start getting ready for stories, working out acceptance criteria and so forth with the BAs and devs. 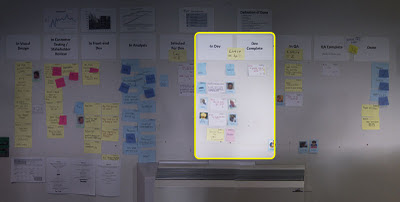 
We currently have four dev pairs and so have set our WIP limit to four for the combination of the two dev columns. At the beginning of the project we set the WIP limit to three as we always had a pair on tech tasks, environment set up and the like, but now we are moving into the second half of the first release most of that type of task has been finished. If there are four white cards in the two dev columns the next pair to finish should help out with the testing effort or work on some tech tasks. This helps keep the actual work in progress on the board to a manageable amount. 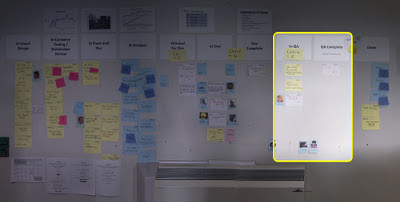 The 'In QA' column has a WIP limit of two as we have two testers. If a story gets blocked due to a bug then devs need to come and help clear the blockage. The card can NEVER move back into dev and the QA can't pick up a new card from dev complete until the issues are resolved. This focuses attention and ensures that stories progress along the wall in a timly manner, always the empasis on getting completed work 'done done' so that we can claim the points, and move on. 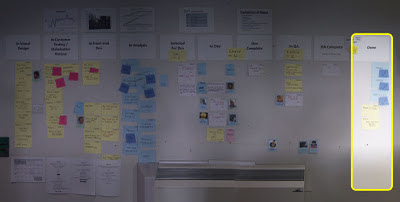 
This column contains all the stories finished this week. Done Done. These stories are ready to be showcased to the product owner and will be demoed to the entire client user team (all stakeholders) on the Friday of each week. Every Monday all the cards are removed from this column so we can see what has been finished this week and so that the product owner and other stackholders can see the progress since last Friday's showcase. 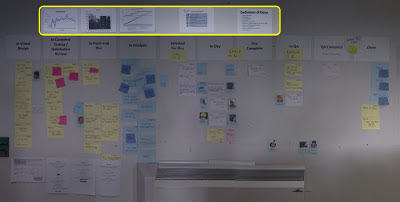 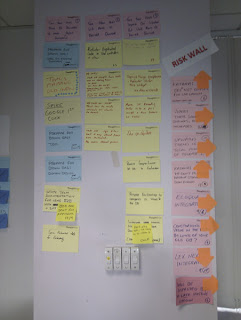 Risks/Issues/Tech Tasks/Tech Debt Wall
There are four columns to this section of the wall. The left most three are for 'tech debt', and tech tasks. The right most is for capturing risks and making them more visible.

Column 1 (Things we must do to make the project successful).
Things like integrate with the corporate authentication system, spike asset management or setup performance testing environment.

Column 2 (Things that would enable us to deliver faster)
Includes things like refactor acceptance tests to reduce build time, and optimise windows configuration on all dev machines.

Column 3 (Things that are not essential to the success of the project but will give us a better solution)
Mainly includes lists of refactorings and areas we want to achieve better test coverage.

Column 4 (Risk wall)
Any risk to the project, from integration points, new technology, people, to computers and hardware. Listed in highest risk at the top. The arrow represents whether the risk is increasing or decreasing as time passes.

Summary
So that is our wall. It saves us time, keeps us focussed on what's important, and neatly tracks our progress.

How does your team work? I would be interested to know what other types of walls are out there. I've seen a few in my time but there is always another way of doing it - what does your wall do for you?