Do we need to deploy clean up work if there is no additional functionality? i.e no (perceived) business benifit.

We recently did some work to a number of services where all we were doing was removing some old functionality that is no longer used (obsolete code). Removing messages, handlers, classes, tests. I like deleting code, it makes things simpler, less logic to break, less places for bugs to hide. Once we finished, we wanted to get all of this released to prod ASAP. We tested all of the areas affected in a large system level test in the preprod environment, all of the services (and others that had not changed) working together.

But we had push back.

The question was: Why do you need to release this clean-up in advance of any further work?
By doing so you are making this an active rather than passive deployment with associated extra risk and double the cost.
If you are removing unused code you can just deploy with the next addition/change to code because by testing that you are implicitly testing that absence of code. Even if the new code isn’t affected, then our deployment checklists cover that situation too – we have already double checked this removal/clean-up of code won’t have an impact on production

I broke this down into a number of sections. A number of questions that I thought were being asked in the statement.

Question: Why do many releases instead of one, isn’t that more risky?
This is a question from the old skool of thought, releases are big bad things we need to do as few as possible.
Answer: I would say many small releases are inherently less risky.
If (very unlikely but) if something goes wrong it will be less clear what caused the issue. Was it new functionality, or the clean-up work that is the culprit?
If we release now, we know what to monitor over the coming days, and have to monitor less
If we don’t deploy all 8 things, someone else will (at some point and in some cases many months in the future). This poor soul will need to decide if the changes we did need testing, what the consequences of the changes are, and worry about if there are other dependent services to deploy.
Each service is push button, so deploy time is small.
Rollback is not hard if we need it with no business consequences at the moment. In future if we release with other functionality and the changes we have made break something we need to rollback new functionality too.

Question: If we are removing code why the need to release anything? There is no new functionality to release.
I guess this is a question about business value, no new business value no need to release.
Answer: That is true, its mostly removing old code and cleaning up. But its just as critical, almost more so to get this out in a small release sooner, as we may (again unlikely but possible, we are human) have removed something we should not have.

Question: Won't it be more to test doing it twice?
This assumes that we manually test everything on every release. where actually we only test what has changed manually in conjunction with automated testing for the rest.
Answer: We have already done good full end to end testing last week of the 8 things affected. If we wait until next week or the week after we will have to do the tests again as the versions of things to be released will all be different by then, so will need to test the 8 deployable things again full stack = extra 1 day

Other reasons for deployment.
The changes, what we did and why we did it, are still fresh in our minds. The longer we leave it the less sure we are that we will be doing the right things.
Its not critical, but I'd prefer not to do a partial deployment (service-X is going to get released soon) I'd like the rest of the clean-up to be deployed too.
Ideally prod and preprod are as same as possible (for environmental consistency and testing reasons). Any differences between the test system of preprod and prod invalidates other testing efforts. Because in prod services will be integrating with a different version of other services than that are in preprod making like-for-like testing impossible.

I maintain there is business benefit in doing the deployment now, and deploying all 8 services at that. To be fair businesses, managers, stakeholders, even developers (especially senior ones) have all seen their fair share of long deployments, failure and difficult rollbacks. Leading, ultimately to a fear of deployment. So it's natural to want to avoid the perceived risks. But perversely by restricting the number of deployments you are actually increasing the likelihood of future fail.
A core philosophy of the devops culture is to release early and often (continuous delivery). By doing the things you find painful more often you master them and make them trivial, there by improving your mean time to recovery.

The business benefit is ultimately one of developer productivity, testability and system up-time
Posted by Damo at 20:54 No comments:

We use Splunk to aggregate all the logs across all our services and APIs on many different machines. It gives us an invaluable way to report on the interactions of our customers through new business creation on the back-end servers running on NServiceBus, to the day to day client interactions on the websites and mobile apps.

We have been investing in more monitoring recently as the number of services (I hesitate to use the buzzword micro, but yes they are small) is increasing. At present pace I'd say there is a new service or API created almost each week. Keeping on top of all these services and ensuring smooth running is turning into a challenge, which splunk is helping us to meet. When you add service control, pulse and insight from particular (makers of NServiceBus) we have all bases covered.

We have recently added alerts to splunk to give us notifications in slack when we get errors.

We are sending alerts from splunk to slack using batch scripts and powershell.

First set up an alert in splunk, This splunk video tells you how to create an alert from a search results. We are using a custom script which uses arguments as documented here. Our script consists of 2 steps a bat file and a powershell file. The batch file calls the powershell passing on the arguments.

You can see the call to the slack API in the invoke-restmethod, the slack documentation for using the incoming web hook is here. there is quite a rich amount of customization that can be performed in the json payload, have a play.

Before you can actually use this you must first setup slack integration as documented here which requires you to have a slack account.

The fruits of our labor:


All the script code is given in my gist here.

Thanks to my pair Ruben for helping on this, good work.

A couple of years ago i wrote a blog post about podcasts for developers, this is a follow up as I've now got substantially more. That and a couple of my colleges have asked for my list recently.

Bear in mind that some of these podcasts are no longer active. I've kept them in my list because i find past episodes very relevant to the here and now. you can search back to find relevent episodes on anything you care to think of, super useful.

Incidentally my current podcast player of choice is podcastaddict, variable speed playback and great control of how to download files, brilliant search functionality for local podcasts and its very easy to search for and add new podcasts. use it :-)

My opml file extracted from podcast addict is located here: https://gist.github.com/DamianStanger/9606fcf3fb09cc0bd87f
Posted by Damo at 22:57 No comments:

We use Go from Thoughtworks to manage the build and deployment of all our software. Attached below is a screen shot of the current pipelines.

As you can see we have quite a lot going on. In fact we have 390 pipelines (55 services and api builds, 40 nuget package build/publish, and the rest are deployments to our 5 environments from test through preprod and live). There are 730 stages in total (Build, test, deploy, ect). And we have 20 go agents running on different servers.

So you can imagine finding the pipeline you are looking for is tough. We have adopted naming conventions which help but its really quite difficult to find what you are after with the supplied search capabilities.

Also its very tricky to see if anything is broken (red), there is just no way you will notice it in all the pipelines.

As an aside we are using cradiator to give us an information radiator of all our build and deployment pipelines (I blogged about this a year ago) but with over 700 stages its really in need of an overhaul but that's for another blog post.

We have created a tamper monkey script (found here) that enhances the functionality of the Go pipelines view, allowing you to filter the visible pipelines by status or by keyword.

There is also the issue of navigating between the settings and the pipeline history, and visa versa. Often you are investigating a failure, you find the problem in the history and then want to change the settings. Well there is no link, so we created one for you to easily navigate between the 2 parts of the UI easily.

The script can be found here: https://gist.github.com/DamianStanger/d1db873e9297b34160ce#file-go-cd-tampermoneyscript-js

Firstly you need to get tamper monkey installed in your browser, you can get it from the chrome web store or http://tampermonkey.net/ 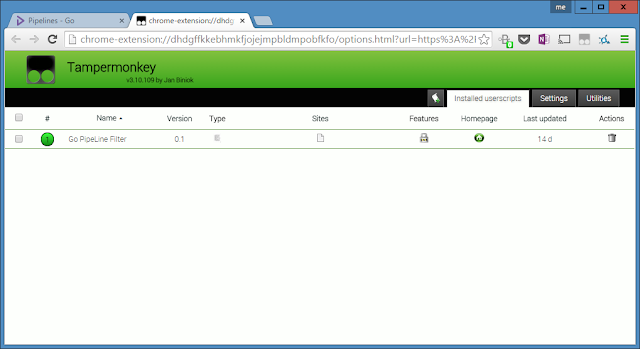 That's it, instantly enjoy better productivity. I imagine this is a good enhancement even if you only have a tenth of the pipelines we have.